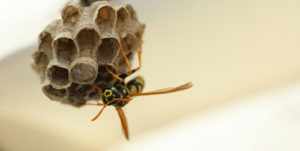 There appearance varies tremendously depending on species, most have two pair of wings and a pinched waist. They range in colours from black to metallic greens and blues.

They vary in size from almost microscopic to several centimetres long.

Eaves, soffits, window frames, chimneys, walls and gutters on home exteriors are popular wasp nesting spots. Flowers and plant life attract them to yards, as do patios and other outdoor eating areas with crumbs or sticky soft drinks and alcohol spills that are not cleaned up. Garbage cans that are not properly covered and regularly emptied also attract wasps that are seeking sources food. Properties with abundant insects and spiders provide ample prey for both developing and mature wasps.

Contrary to popular, but inaccurate beliefs, nests left behind by wasp populations that die during the cold weather months are generally not reused by subsequent generations of wasps.

Wasps near the home can ruin outdoor activities and make yard work difficult. While they rarely go out of their way to sting, wasps may become hostile if threatened or disturbed. Their stings are painful but typically nonthreatening to those without allergies to the wasp’s venom.

Zeropest Australia uses an integrated approach that employs a variety of effective and efficient methods to control wasps. Our integrated program includes using: Inspection – determining what is needed to provide an effective wasp control plan, documentation – explaining the specifics of the overall control plan and the findings and results of initial inspection. Cultural controls modifying the area around the home or business to reduce the number of sites that is suitable for wasps to nest, exclusion making it hard for wasps to get inside the structure.

Sanitation – keeping the area clean and efficiently reducing access to the wasp’s sources of food.

For more information or to schedule an appointment, please contact Zeropest Australia,

Some wasps are predatory, while others are parasitic. Predatory wasps kill and consume other insects as well as other animals which they often feed to their larvae.

Parasitic wasps typically lay their eggs in the bodies of living creatures like caterpillars or spiders. The larvae feed on the still-living host. Wasps can assist in the management of other pests, particularly in agriculture as biological control agents. Many wasps also feed on nectar from flowers and therefore function as pollinators.

Some wasps are aggressive species and can sting when threatened. Unlike honey bees, wasps often are capable of stinging multiple times.

There are many species of wasps that are important pollinators. However, taken as a group, wasps do pollinate, but are not as effective at pollinating as the bees. This is primarily because bees have hairier bodies than wasps, so pollen is more likely to stick to a bee’s body and be transported from one flower to another.

Late in the summer, the queen of some species will produce unfertilized eggs. These will develop into males. The males will fertilize the wasps that will become the queens of the following year. These fertilized females will overwinter in a sheltered location. In most cases, the rest of the colony will perish when winter comes. Next spring, the queen will start laying eggs. The fertilized eggs that they produce will become workers, building the nest and feeding the larvae produced by the queen.

Bees are winged insects with more than 20,000 recorded species found globally. The Perdita minima, the most diminutive of bees, are shorter than 2 mm long. Bees can be black or brown with red, yellow or lustrous blue stripes.

Bees sometimes make their way into homes while looking for a place to nest. The insects prefer dark and protected areas, so wall voids or chimneys often fit their needs. Any living space exposed to the outside is at risk for bee infestations. Some species that nest in wall voids fly inside the living space through baseboards, electrical outlets, and cracks in walls.

While bees can benefit the environment in many ways, it is inconvenient and possibly dangerous to let a bee hive thrive near your home. In general, bees only sting to protect themselves or defend a nest. Most stings are only mildly painful, but some people may have an allergic reaction.

It is important to properly identify the particular species living near your home, as bees are often mistaken for wasps, each requiring unique treatment methods. It is also necessary to know effective application strategies, as well as the limitations and dangers associated with each method. In many regions, special licenses are required to treat infestations.

The only way to rid a home of bees is to remove the hive entirely. For safety and efficiency purposes, contact Zeropest Australia for help with bee control.

While some bees are solitary, species such as honey bees and bumble bees are tremendously social. Bee colonies are comprised of three castes: the queen bee, infertile female worker bees, and male drones.
The queen mates and lays eggs for the span of her life. Honey bee queens can live up to five years, though most average a lifespan of two to three years. Male drones exist solely to fertilize the queen and die soon after having fulfilled their task. Female worker bees perform a multitude of tasks necessary to the survival of the hive. As a result of their constant laboring, their average lifespan is usually a mere six weeks.

Although only females are able to transfer pollen, all bees are able to sip the nectar from flowers using a tongue-like organ. This nectar is their primary source of energy. Pollen is sustenance for both adult and larval bees, as it contains protein and other nutrients necessary to their survival. Bees possess an organ that converts nectar into honey, which is collected, depending on the species, inside the hive or bee colony.

The most well-documented and encountered bee swarms are those of honey bees. Typically, honey bee swarms are not a major threat. The bees do not have a nest or young and, therefore, are less defensive. But, they will sting if provoked.

Bee swarming typically occurs in colonies that are thriving and with robust populations. Weak colonies may not swarm until they become stronger and larger in population. Starvation, disease, or failing queens are common factors that make a colony weak. Seasonal changes and overcrowding a just a couple reasons swarms occur.

Swarming involves a contingent of workers and a queen departing the original colony. The swarm typically gathers at a resting site, often in a tree, after leaving the colony. Scouts are sent to locate a new location, such as in a log or other cavity. Once a suitable location is found, the swarm will move to the site and begin to nest.

Two kinds of bee swarms occur: primary and secondary. The queen bees lead primary swarms, which include a larger number of workers acting to protect the egg-laying queen. Secondary swarms are led by several virgin female bees and as a result, these swarms are half the size of the primary swarm and do not occur as often.

For more information or to schedule an appointment, please contact Zeropest Australia,


Digital Marketing by King Kong
COVID-19 UPDATE: We're still operating to keep the pests outside. We have implemented a Universal COVID plan in line with DHS regulations to stop the spread and keep everyone healthy.
Services