Spiders come in all shapes and sizes, and even the thought of spiders may cause you to shiver. In Australia, you may find many different types of house spider that will not cause you harm, yet the most commonly found venomous spiders need to be removed with spider control in Melbourne. This includes the redback spider, also known as the black widow, and the funnel-web spider, which are both venomous and can cause serious injury or even death. Read More

At Zeropests, our fully licensed spider control technicians can remove unwanted and dangerous spiders in your Melbourne home, ensuring it is safe for your family and pets. We are the best pest control in Melbourne

If your home has young children, it could benefit from a spider inspection for your peace of mind. Spiders can lurk in many places in your home, including woodpiles and children’s play equipment outside the home and attics and other areas within your home.

At Zeropest, we complete spider control within Melbourne by using our general pest control spray, also known as a GPS. This provides a barrier around your home and within, protecting you from spiders.

It also protects you against other pests such as cockroaches, ants and fleas, among others.

We spray in all areas where spiders are most likely to be harbouring within the home, including skirting boards, ceiling cornices, window frames, heating and cooling ducts, around appliances and in cupboards. We also recommend emptying wardrobes so that these can also be sprayed.

The spray that we use is naturally derived from a white chrysanthemum bud, so it is safe and effective to use.

It is guaranteed to work for 12 months, reassuring you that your home is safe for all members of your family. It also comes with our 100% satisfaction guarantee.

We also provide other insect pest control services such as termite infestation treatments in Melbourne.

Spider Extermination in Melbourne: Contact Us Today, and Make Sure Your Home is Safe

If you are looking for spider removal in Melbourne, look no further than Zeropest for a thorough job and guaranteed outcome.

During the treatment of your home, you will need to vacate the premises for your safety, but don’t worry, you will soon be back inside. Once your home has been sprayed, you will need to stay away for two hours if you are an adult. For those that are more vulnerable, such as children, pregnant women or the elderly, we ask you to stay out of your home for four hours.

The products that we use are designed for maximum impact, yet will not cause any damage to your home, so you can rest assured that your home will remain intact while we tackle any spiders within your dwelling.

You can get in touch with us by filling in our online form or calling us on 1800 38 66 55 and arranging for your inspection and treatment. If you have any further questions, please do not hesitate to get in touch and we would love to tell you more.

Are you in need of spider extermination services in Melbourne? Let our pest control team handle it for you.
Read Less

All About Spider Control Melbourne

Spiders are a diverse group of arthropods found throughout the world. Some species are tiny, while others are very large. Although most common house spiders are harmless, Red back spider and Funnel Web spiders are two common venomous types in the Australia.

Spiders are voracious predators, feeding on insects, other spiders and even small mammals and reptiles.

They differ from insects in that they have two, rather than three, body regions. These two regions are the cephalothorax – which contains the eyes, mouthparts and legs – and the abdomen.

Spiders have four pairs of legs, while insects have three pairs of legs. They possess modified appendages called pedipalps located in the front by the mouth, which in some species resemble an extra set of legs.
Most spiders have eight simple eyes located on the front of the cephalothorax, but some spiders have fewer eyes. The arrangement of these eyes is often used to distinguish between various species of spiders.
The abdomen is unsegmented and contains the genital structures, spiracles and the spinnerets used to spin silk.

Many types of spiders spin some type of web, and the shape or type of web is often as distinctive as the spider itself. Other spiders are active hunters that move about looking for prey, but they do not spin webs.

If your home has a White Tale infestation, Red Back or Funnel Web you can reduce the chances of bites by following these recommendations:

Clothes that have been left on the floor, in a clothing basket or are otherwise exposed should always be shaken well and inspected before being put on.

Beds should be moved out so they do not touch walls or curtains. Bed skirts around the box springs should be removed from beds, and bedspreads coming near or touching the floor should not be used.

HOW TO GET RID OF SPIDERS

Some spiders may be harbouring outdoors in piles of firewood, garden sheds, children play equipment, cubby houses and debris, under items lying on the ground or in voids in hollow blocks, while others may live in attics and roof voids or other areas throughout the home. A thorough, professional inspection from Zeropest Australia will reveal these hiding spots and help eliminate spiders from your home.

Our perimeter and internal general pest control spray ( GPS ) and dusting treatment from Zeropest Australia acts as an invisible barrier around and in your home from pests such as, Webbing Spiders, Garden Cockroaches, Flea’s, Ants, Carpet Beetles, Silverfish, Clothes Moth, Millipedes, Hide Beetles and earwigs. The exterior of your home is surrounded with an uninterrupted band of protection, forming a barrier against unwanted pests GUARANTEED FOR 12 MONTHS!.

The interior of your home is also sprayed including all room skirting boards including 30cm of adjoining floor coverings, ceiling cornices, around window frames, heating ducts, cooling ducts, under and around appliances, around kitchen cupboards, in wardrobes if emptied, floor / ceiling vents and the roof void is dusted.

The insecticides used are derived from the bud of the white chrysanthemum flower, natural, effective, safe and AQUIS approved.

Our comprehensive perimeter and interior treatment gets rid of troublesome pests fast, and you won’t see a trace of them for a long time after the treatment,

That’s because we use highly effective pest control products designed to eliminate many different pests in just minutes with no bothersome odour or damage.

Our spray is SAFE, NATURAL, EFFECTIVE and AQUIS approved. 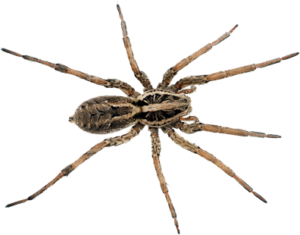 There are no records of any serious symptoms resulting from wolf spider bites in Australia. Symptoms include local pain and swelling.

Female: Brown to greyish brown, cephalothorax often with paler radiating pattern, abdomen often with foliate or ribbed pattern above and black patch below. 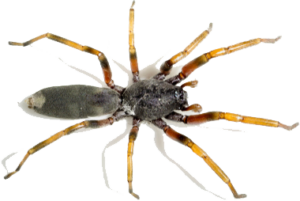 Male: Similar to female but with two pairs of pale spots always present on the abdomen and a dark, oval plate toward front of abdomen on upper side.

Female: Body dark grey, legs with reddish brown tinge, abdomen with dull white patch at tip and sometimes with more or less distinct, paired, pale spots on the middle of the abdomen.

Bites by this spider are relatively frequent due to its wandering habit. Symptoms range from no reaction to swelling and local blistering at the bite site and nausea. The white tailed spider has been suggested as a culprit in rare cases of large scale necrotic lesions but there is little supporting evidence.

Male: Similar to female, though cephalothorax and legs often with a polished lustre.

Similar in form to Trap-door spider except generally smaller in overall body size and darker in colour.

Despite being a relative of the Sydney funnel-web spider, the venom is only known to cause general symptoms such as headaches and nausea. 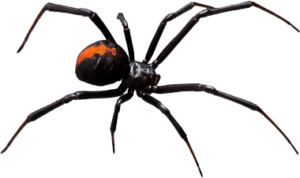 The bite is highly venomous and characterised by intense localised pain and around the bite site. Other symptoms may include sweating, muscular weakness, loss of coordination and, in severe cases nausea, vomiting, convulsions, etc.

Robust, hairy spider with a typically blunt, square front end of the cephalothorax.

Because of its timid nature this spider rarely bites humans; however, the bite can cause general symptoms including nausea, sweating, localised pain and swelling. 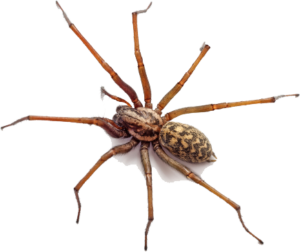 Similar in shape to the red-back spider, with pea-shaped abdomen and slender legs.

Unlike the red-back spider the bite of the brown house spider is not lethal, but may cause headaches or nausea. Small blisters may occur around the bite site. 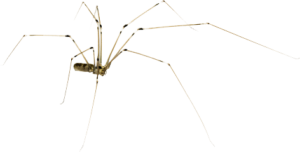 Recognised by its extremely long and slender legs and relatively small body.

Relatively harmless; local reaction if any. Folklore has it that the venom of this spider is extremely venomous.

Female: Brown to grey with several pairs of darker spots on upper side of abdomen, sometimes with dark bands on legs.

Body very flattened with long, rather forwardly directed legs. The first two pairs of legs are longer than the second two pairs.

Does not build a web.

This is a timid spider and bites are infrequent. Symptoms are minor, including local pain and swelling. 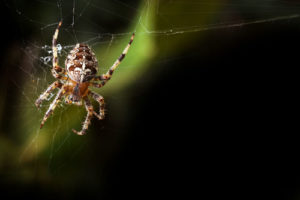 Typically with a triangular abdomen with two noticeable humps towards front.

The bite of the garden orb-weaver is not considered dangerous. Symptoms may include localised mild pain and swelling, nausea and dizziness. 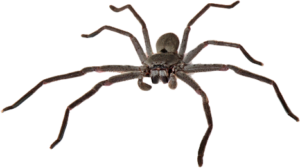 Body flattened, though less so than other huntsman groups. First two pairs of legs distinctly longer than hind two pairs.

No serious symptoms have been recorded from the bite of N. Diana.

Male: Similar to female except that some specimens have golden hairs on the cephalothorax.

Due the size of the fangs, the trap-door spider can inflict a deep, painful wound, but, the venom is not known to cause medical problems. The two large appendages on the tail of the spider are spinnerets, on which the silk glands open.


Digital Marketing by King Kong
COVID-19 UPDATE: We're still operating to keep the pests outside. We have implemented a Universal COVID plan in line with DHS regulations to stop the spread and keep everyone healthy.
Services